Is My Garbage Disposal Repairable? 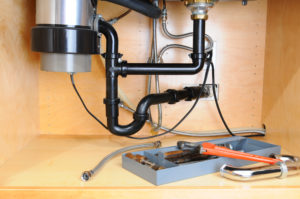 Sometimes, fixing garbage disposal is as easy as flipping a switch. More serious fixes, however, might have you disassembling the entire unit. It can get to a point where even if your unit is salvageable, you’re better off replacing it.

Garbage disposal repair can be straightforward and simple once you identify the issue. First and foremost, never reach into a garbage disposal. The blades won’t sever your fingers, but they will bang them up pretty badly.

Here are some common problems associated with garbage disposal repair and some solutions to them.

The garbage disposal won’t turn on

If you flick the switch located on the wall or under the sink and nothing happens, it probably means there is an electrical issue. If you don’t hear the motor whirring, it means something is keeping the disposal from being powered.

Here’s how you solve this issue:

Before you go googling, “plumbers near me”, take a moment to check if the disposal is plugged in. As obvious as it seems, sometimes the simplest solutions are all it takes. Like we said earlier, garbage disposal repair can be pretty straightforward.

If it’s plugged in, the problem could be a “tripped” reset button. This can happen when something is caught in the blade, or when it’s over-flowed. The reset button can almost always be found on the bottom of the disposal.

If it’s been tripped, then it should be sticking out. Push it back in to reset the garbage disposal.

Still no luck? The culprit could be a tripped circuit breaker. This can happen if the circuit is overloaded with electricity. Try resetting the breaker from the main service panel.

If you’re still experiencing trouble, you might have a wiring issue. This requires a more hands-on approach. You need to take apart the switch controlling the disposal. However, before getting started, turn off the circuit breaker linked to the disposal.

When you have the switch disassembled, make sure the wire connections are tight. Sometimes, the only issue is a loose connection. However, if your connections appear secure, then the switch itself could be to blame. Try replacing the switch.

If this doesn’t work, then you need to replace the entire disposal unit.

The garbage disposal hums but won’t turn on

If the disposal hums but still doesn’t turn on, then it is likely jammed. Usually, this forces the reset button to trip. Humming garbage disposal puts a lot of strain on the motor and will eventually cause it to burn out.

If that happens, it’d be wise to head to your computer and type in, “plumbers near me”. The issue has eclipsed the scope of a garbage disposal repair blog. If you act fast, you can avoid that worst-case scenario.

Often, jammed disposal is caused by something like a bone or seed getting stuck between the impeller blade and the drain hole. The problem is likely too deep for you to fish out with a fork.

Turn off the circuit breaker that powers the garbage disposal, and make sure the disposal switch itself is turned off. This is always the first step when dealing with any sort of garbage disposal repair.

Locate the flywheel turning hole near the bottom of the unit. It’s shaped like a hex and should be compatible with a hex wrench. Insert the hex wrench and turn it clockwise to free the stuck impeller or flywheel. You may have to jiggle the wrench back and forth to free whatever is jammed.

If you don’t have a wrench, you can try sticking something like a broom or wooden spoon down the sink and into the disposal. Press the tip against the blades and try to rotate the impellers.

Take a peep down the sink. If you notice something stuck at the bottom of the disposal, use tongs or pliers to remove it, never use your fingers.

Leaks are one of the most frustrating issues when it comes to garbage disposal repair. This time, we really wouldn’t blame you for following through with the “plumber near me” advice we threw out there earlier. One reason leaks are such a pain is that they lead to water damage and mold forming under your sink and in your kitchen.

Garbage disposal leaks are most common in the following areas:

Solving a leak issue is pretty straightforward. You need to locate the leak and seal it.

Try tightening the bolts mounting the unit to the sink. If the bolts are already tight, you can try reapplying putty to the sink flange, so it seals to the sink.

You should also try tightening the clamp on the hose leading to the dishwasher. If the leak is coming from your discharge pipe, you may need to replace the gasket.

If, after all this, you’re still experiencing issues, you may need to replace the garbage disposal unit.

Find Us On Social

We use cookies to ensure that we give you the best experience on our website. If you continue to use this site we will assume that you are happy with it.Accept